553 miles traveled for the day 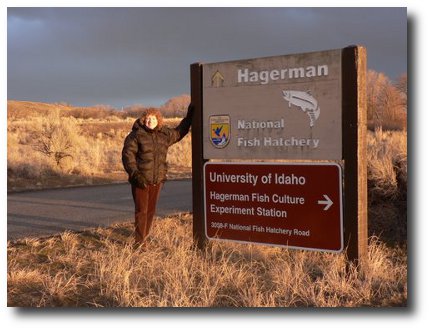 We’re parked on the grounds of the Hagerman National Fish Hatchery, which is located in the Thousand Springs region of the Snake River in southern Idaho. We’re visiting with Eric, a long time family friend, who works here at the hatchery. It was a long day’s drive, but we made it in good shape, arriving at 5:15pm. This is a great place to stay the night. In addition to catching up with Eric, we’re able to plug in and heat the boat cabin with our portable electric heater.

It took an early start to make it here that soon, especially considering we lost an hour to the time zone change along the way. I’d planned on getting up at 5:30 am this morning, but was awake at 5:10 am, eager to get going. I was greeted with 3 inches of heavy wet snow which had to be pushed off the driveway before I dared try rolling the truck and boat down to the street. The chock blocks were frozen in place, so I whacked them loose with a lug wrench, and at 6:45 am we were actually on our way. We encountered slush on the roadway for the first 30 miles, but after that the roads were clear. We crossed the Columbia River into Oregon just south of Richland WA, and picked up I-84 near Umatilla OR. This highway follows the old Oregon Trail route through northeastern Oregon and southern Idaho. It’s remarkable to consider that in just one hour we travel about as far as an emigrant’s covered wagon could go in a week.

Mileage was rather poor (11.7 mpg for the first tank and 12.9 for the second), due both to some steep grades on this first leg of the trip, as well as to the surprising headwinds we encountered. I was driving a bit faster than usual, which also didn’t help. I am hoping to average 13 to 14 on the flatter terrain, and holding the truck down to around 60 mph should do the trick.

We’ve just returned from a delightful evening walk along the hatchery entrance road. This place is a true wildlife haven, with hundreds of ducks and geese winging their way overhead, and taking flight off the spring creek which flows through the grounds. We were favored with a beautiful sunset while on our walk. The low sun angle brought out vivid highlights in the trees and brush, and illumined a brief but intense rainbow just before setting.