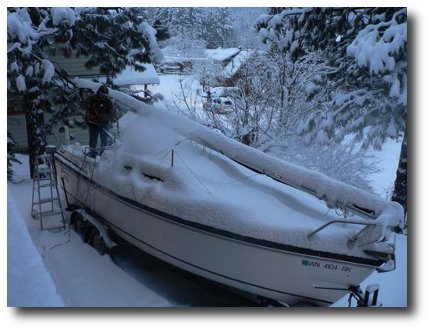 This weather is just nuts. We’ve lived here for 25 years, and this is easily the coldest, snowiest end of February/beginning of March we’ve ever experienced. When I got up yesterday morning I was greeted with over a foot of new snow. Time and energy which I needed to expend on final preparations was spent cleaning the boat off, again, and shoveling driveways (we have two). And, it continued snowing throughout the day, with half a foot of additional heavy, wet snow accumulating. It finally quit by late afternoon, but the forecast didn’t look good. Sure enough, this morning it’s started to snow again, and 6 to 8 inches is forecast for today and tonight, with more predicted tomorrow. I’ll have major work just getting the boat down my 16 percent slope driveway tomorrow morning. 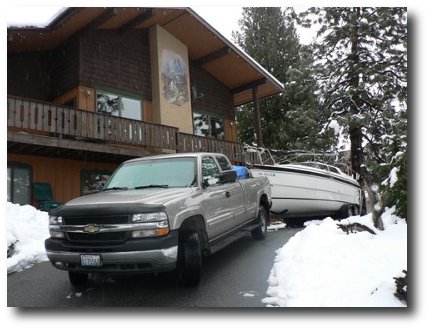 Wintry weather is not just a problem here at home. It’s totally disrupting our road trip plans. I’d intended on taking a northern route, via I-90 as far as Sheridan, Wyoming. This involves crossing the panhandle of Idaho, over 4th of July Summit and Lookout Pass. I checked the road report for these two passes last night, and was seeing serious travel warnings and “chains required” notes for vehicles with tows. Further, an arctic outbreak is bringing severe low temperatures to the northern plains. I definitely want to avoid having to chain up, so my preferred route, which included a sightseeing stop in the Black Hills, is no longer being considered. Instead, we’ll swing south, taking I-84 through Boise and pick up I-84 just north of Salt Lake City. We’ll stick with I-84 as far as Lincoln NE, and then pick up our planned route east. We drove this route 2 years ago and wanted to go a different way this trip, but the current weather pattern is forcing our hand. Today, I’ll have to drag out the AAA camping directories and try to locate campgrounds which are open year round. Most campgrounds don’t open until later in the spring. I like having specific destinations targeted when towing the boat cross country, and I don’t appreciate surprises such as “campground closed” signs. Meanwhile, today I’ll keep the driveway cleared off, finish last minute preparations, and finalize route planning. The old saying goes, “Everyone talks about the weather, but no one ever does anything about it”. Well, tomorrow morning I plan on doing something about it. Namely, getting out of here and searching for some place warmer.