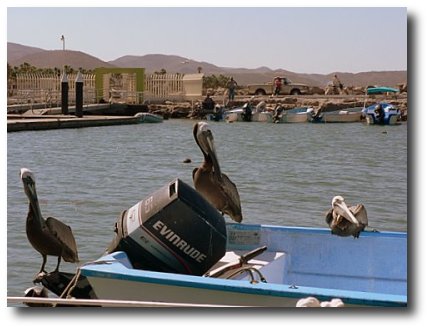 When we moored on the seawall yesterday, among the pangas, my one concern was with the pelicans. They love to perch on the pangas tied up here. Some stand on the gunnels, while others favor the tipped up housings of outboard motors or the lower units. Whereever they perch, however, they quickly coat boats and motors with whitewash. The more fastidious panga owners counter by covering their outboards with an old blanket or piece of carpeting. I didn’t look forward to cleaning up after the pelicans, so I contrived a web of lines over our outboard. We also stowed our backrests and cockpit cushions in the cabin when we went to town.

As it turned out, the pelicans gave us no problems at all. They seemed to prefer their tried and true panga perches. My biggest problem came from the pangas themselves. More specifically, the two pangas moored on either side of us. When we tied up yesterday, we picked a spot with a comfortable amount of room. The breeze was out of the south during the day, and all boats angled parallel to each other. However, last night a westerly land breeze blew across the boat basin. For some reason, the panga on our starboard side swung toward us, while the panga on our port side leaned in the opposite direction, and thus also toward us. They took turns bumping into the sides of our hull. I did my best to adjust our mooring lines and set protective fenders, and even rafted our dinghy between us and the most troublesome panga, but we still got occasionally bumped. Finally, this morning I got in the dinghy and, with the aid of the dinghy’s anchor, managed to reset my stern anchor to a more favorable angle, and this has improved things. 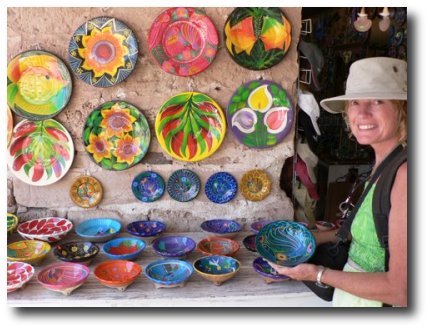 The day was pleasantly warm as we strolled down the seawall and headed south along the malecon. We turned at Salvetierra, and walked up that lovely historic, cobblestone street toward the green shrubs which are trimmed into arches overhead. We shopped for leather goods and ceramics at an interesting old shop on a corner, near the mission church, and then visited another ceramics shop for a piece Sandy had eyed the day before. By then it was lunch time, so we backtracked, to Cafe Ole, which is next to the beautiful Hotel Flores, where we enjoyed a delicious lunch. Thus fortified, we marched west on Hidalgo to pick up beer, pop, rum, and other necessary provisions at the Supermercado de Pescadore. I had brought my West Marine collapsible wheeled dock cart along for the return tote, and I once again received expressions of amazement and approval from the store clerks when I opened it up. We walked slowly back toward the boat, easing the small wheels over the rough spots in street and sidewalk. We dropped in at the ice cream store for cups of our favorite flavors, and enjoyed them in the shade of a welcome tree.

We got back on board, and I did one of my dreaded “dumpster dives”. We store all our extra provisions in lidded plastic tubs, slid way back in the king berth, which is below the cockpit. Sandy has an accurate and detailed inventory of their contents, and every few weeks I have to crawl back there and retrieve items we’ve run out of. I pulled out loads of good things to eat, and then it was Sandy’s turn to transfer the items to our smaller working tubs, which are handily stowed in the locker under the forward settee cushion. After all that work, there was nothing more to do than read and nap in the shade, until the dinner hour approached. 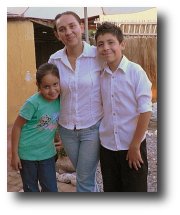 Tonight, our last in Loreto, was dress up night. Sandy wore a colorful tropical dress, and I wore a sport shirt, long pants and tennis shoes for the first time in over a month. We had reservations at Mita Gourmet, and once again enjoyed a leisurely and delightful dining experience at that wonderful restaurant. After dinner we walked back, past Biznaga, where their grand opening was in full swing. As we approached the entrance, we heard Herzon once again playing Stairway to Heaven on his acoustic guitar. We couldn’t help but stop in. The place was crowded, and Herzon’s family was hard at work, attending to their diners. They were kind enough to seat us at a table for a short while where we had coffee and again enjoyed Herzon’s marvelous guitar playing. We visited with the couple from Gig Harbor, who had returned to Biznagas for dinner. We bought Herzon’s third CD and wished them the best of luck with their new restaurant. Sandy took a picture of the mother and her son and daughter. They seemed a little tired, but happy with the success of their grand opening. We then strolled under the stars, back to the boat, filled with happy memories of our two visits to Loreto.