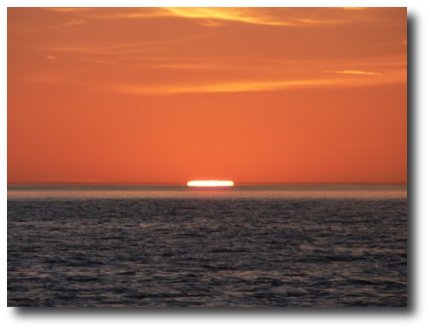 We arrived in Santa Rosalia 5 days ago, with the rising sun, and so today we departed. We rose at 6 am to the sound of big gas inboards rumbling as they warmed up. Our friends of the past several days were heading out to fish. We took our time and ate our oatmeal before leaving the dock. After our abortive foray out of the marina yesterday, I was concerned with the steady breeze blowing off the land and through the marina. However, Irving on one of the sportfishing boats radioed in that it was quite calm a short ways out. We left the slip at 7 am, and had a ringside seat to a great sunrise (at my age every sunrise I see is great). I trolled a lure as we motored the 7 miles across to San Marcos Island. On the way there, we were

entertained by a small group of sea lions who were launching themselves completely free of the water in a series of spectacular leaps.

A small fleet of open fishing boats were trying their luck over the reef which extends out past the north end of the island. Our friends on Tuna Time were there as well. We heard them radio Irving on the Betty B. Both boats were landing a few cabrilla. I jigged the lure Irving gave me, and managed to bring up a couple fish, only about a pound each. Not exactly the 25 lb yellowfin I was hoping for, but at least we’ve got fishscales on the boat and the prospect of a fish fry for dinner some evening soon.

A little before noon I brought my line in, and we motored around the west shore of the island, to a spot called Sweetpea Cove. We anchored near a Mexican fishing camp and had lunch. While I was on the foredeck preparing to lower the anchor, a pelican paddled his way toward our boat. We realized that he had his sights on the fish which I had suspended in the water from a rope tied to the railing. We noticed that the poor bird had a broken wing. However, I wasn’t about to surrender my fish to him, but we did quite a dance with him before getting properly hooked.

After lunch a breeze came up, and I decided to set the sails for the first time on the trip and move down to the south end of the island. While we were getting underway we saw our first sea bird/dolphin feeding frenzy. About a quarter mile out the surface of the sea was being thrashed from above and below. A

pod of several dozen dolphin were tearing into a large mass of baitfish. Overhead, squadrons of boobies would circle and plunge in their stiletto dives, piercing the water like spears. I’d seen such displays on TV nature programs, but had never witnessed the scene in person. It was a remarkable sight.

As we neared the south end of the island we could see the huge gypsum mine which dominates the landscape there. A community of about 650 people live next to the mine and, from what we could see, must live a very dusty, dirty existence. Any amount of wind raises clouds of dust throughout the area. 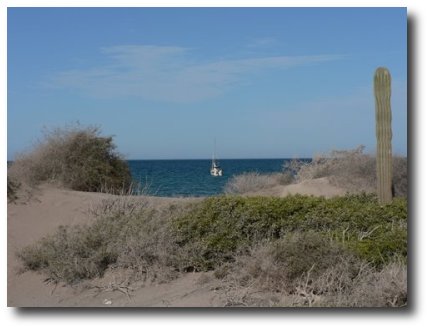 We opted to keep on going, since the wind was now out of the southeast and right on our nose. We entered Craig Channel, and figured on anchoring on whichever side of Punta Chivato seemed to offer the most shelter. On the way down channel, Sandy glassed the arid shoreline, and remarked at the dense forest of saguaro cactus which was growing a short distance beyond the beach. We decided to go ashore and check it out. We got to within 100 yards of shore, found a sandy patch of bottom, and anchored in about 8 feet of water. The beach was heavily littered with shells, many of which were different from any we’d seen elsewhere. We walked a short way inland to view the cactus varieties which grew there, and then returned to the beach and gathered shells as we walked back to the dinghy.

By this time it was after 5 pm, and was time to find shelter for the night. Punta Chivato is a good place, with anchoring options for both north and south winds. However, the sea breeze conditions we had this afternoon brought us both wind and swell out of the east. I decided that the anchorage south of the point would be best, and we made for it. We got here at 7 pm, coming in with navigation lights switched on. It was virtually dark by the time I set the anchor. The wind has died, and we’re in about 8 feet, right in front of a $300 – $800US / night luxury hotel. We have residual swells refracting around our protecting point, so we’re occasionally getting rocked a bit sharply. I’m expecting this to settle down as the night proceeds. We had a late dinner of chicken fajita on Mexican rolls, with fruit salad on the side. Gourmet fare, for sure.