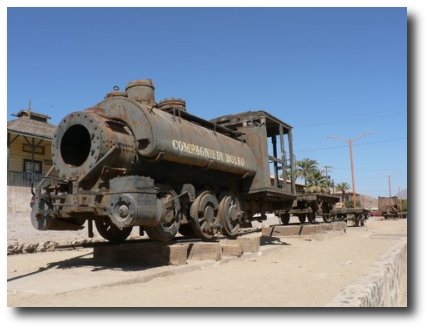 Last evening we decided that, if the weather forecast was favorable, we’d depart manana. I think I’m starting to settle into the lifestyle down here. It’s a day later, and we may leave manana.

We got up at sunrise and listened to the SSB net weather report while enjoying a comfortable breakfast. Forecast for today on the Sea of Cortez was for flat conditions all day, and in fact for the next week. We decided to take our time, walk into town to post some mail at the post office, visit the mining museum, grab one last shower, hopefully this time with hot water, and then pull out after lunch. The museum was highly interesting, with old photographs, 19th century mining equipment, old office machines and other artifacts nicely displayed. Some of the information plaques were in English, but we were able to get the gist of things on many that were just in Spanish.

A final note about showers. When we first arrived, we were told by Carlos that there was no how water because of a lack of propane, but that delivery would occur on Saturday. Well, Saturday came and went, and no hot water. Last night Carlos came in to apologize. The propane company ended up taking the whole Easter weekend off, but he assured us that delivery would occur Monday morning. As we walked into town we spied the propane truck in front of the marina, preparing to deliver. Hurray! After our walk, Sandy grabbed her shower stuff and confidently strolled up the ramp. I worked on getting the boat ready to go. A while later she returned, all rinsed and refreshed, with another cold water shower. I’m sure they got delivery of propane, but somehow that didn’t translate into hot water. Who knows. 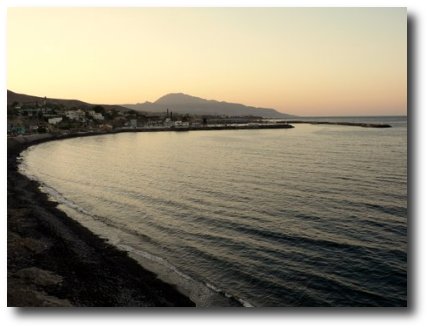 Around 1:30 we were ready to go. However, a wind had come up by then, and the sea outside the breakwater was solid whitecaps. We decided to give it a try, and eased out into open water. The seas were 4 to 5 feet, very closely spaced and steep faced. The direction we needed to head would have put us parallel to the troughs. We easily decided that moving was a poor idea. We retreated to our slip and enjoyed a nice afternoon in the marina. Sandy fixed up a delicious chicken fajita dinner, and we went for an after dinner stroll along the waterfront promenade. It was nearly dark by the time we got back to the marina. Looking out, beyond the breakwater we could see dozens of points of light, lined up about halfway to the horizon. We were seeing the white running lights of pangas, those small, open Mexican fishing boats, perhaps out jigging for Humboldt squid.

The weather tomorrow is supposed to be calm, and we plan to start early, and hopefully do some fishing around San Marcos Island.