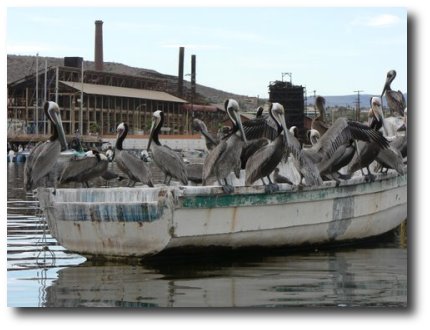 Layover day in Santa Rosalia. A breeze came up in the middle of the night, and I realized I’d forgotten to bungee the halyards to the shrouds, and they were slapping the mast. I got up and secured them. 2 am, and the pelicans were still diving on fish in the marina.

I heard Howard in the next slip over listening to a cruisers net on his ham radio. I asked him for the frequency and was pleased to be able to tune it in on my portable SSB receiver set. If I can continue to hear this broadcast, we will have good access to weather reports.

After breakfast I tore into the king berth storage area, and reorganized things. Much better now. We walked into town with friends from 2 other boats, and did some grocery shopping. While I was waiting near the checkout counter, the young woman at the register gave me a coy smile, followed by an unmistakable fluttering of eyelashes. I thought, wow, 60 years old and I’ve still got it. Then she shyly pointed toward my left shoulder and fluttered her eyelashes some more. Then it hit me. She wanted me to take her picture. As I got the camera ready, she grabbed 2 of her women coworkers, and as I aimed the camera, they hugged close together with 3 lovely smiles. I showed them the picture, and they all laughed and thoroughly enjoyed the moment.

After shopping we all went out to lunch, and had a great time telling stories. I noticed a guy at a nearby table who had a Plain Washington shirt on. I talked with him, and sure enough, he and his wife live only 15 miles from our home. Small world. 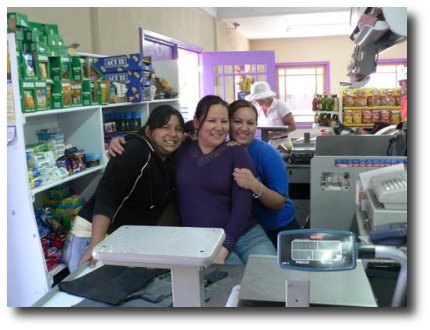 Back at the boat we stowed the groceries, and Sandy went up to do laundry. I got the hose out and rinsed salt off the boat. The folks in the slip immediately next to us had returned from fishing, and he again had landed a beautiful yellowtail, about 25 pounds, and a small, totally crimson red fish. I’ve never seen anything like it. He most generously gave me one of his special jigs, and passed on advice on fishing for yellowtail. He said I needed at least 30 lb test line, tied directly to the jig. Yellowtail are incredibly strong fish, which can run up to 50 lbs in size. They’re real battlers. I hope I get the chance to tangle with one.

I helped Rich get clear of the dock with his 50 foot long triple masted aluminum sailboat. It was very difficult, since a fairly strong breeze had him pinned to the dock. He ended up running a line across to the upwind slip and winching his boat off the dock, so we could manually ease her back. Once in that position, he was able to motor free. His boat weighs 55,000 pounds, so such operations can be really challenging.

Both Sandy and I took showers in the beautiful new facilities this afternoon. We couldn’t shower yesterday because there was no hot water. We were told that they were out of propane, but that delivery would be today, and they would have hot water this afternoon. By mid afternoon the water was still cool. We later learned that the story here last year was also that the water would be hot manana. Oh well, the showers are beautiful, with nice local tile, and spotless. The cold showers were most bracing.