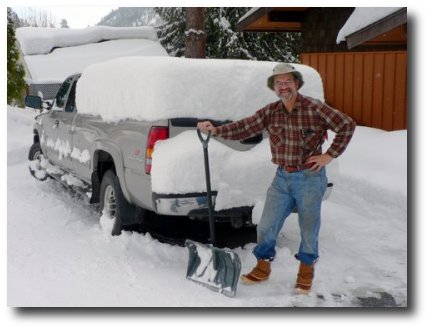 It’s been 10 days since we pulled out of the driveway in Leavenworth WA. A foot of snow still covered the lawn on the day we left. We’ve now traveled 1,810 miles south, and tonight we’re sitting in an RV park only 30 miles above the Mexican border. However, it seems like winter wasn’t ready to give us her leave, and has caught up with us here. Air temps got as low as 44 degrees during the day’s drive, and we passed through several chilly downpours, and a couple of hail storms. The sky island mountains to the southwest are dusted with fresh snow. A raw 20 mph wind is blowing from the northwest. We’re tucked into the boat cabin, with the winter side of the sleeping bag up, and the Wallas stove heater going full blast. We hope this wintry weather blows through quickly.

The drive south has gone mostly well. We’re fortunate to have family members strategically positioned about every 450 miles along the route. With layover stops in Klamath Falls OR, Folsom CA, Los Angeles CA, and Chandler AZ, we’ve been enjoying a traveling reunion with close family members.

The truck is running very well, and I’ve been averaging 16 mpg, which is remarkable, given the load we’re towing. The trailer, however, has been the occasion of a running series of aggravating problems. Trouble began as a result of the rotten condition of I-5 in the San Joaquin Valley. Extensive stretches of concrete surface are badly fractured, and large chunks have settled an inch or two. These hazards are impossible to dodge, and they really jolted us on many occasions. At a rest area just outside LA I discovered that a weld on one of the trailer fenders had broken. I’ve been in the custom of hooking the tie down strap to the fender bracket, and the jolting had been just too much for the weld. The fender was attached at only one end. I repositioned the strap, and made it to my folks place, where I bolted an aluminum angle brace to the frame to stabilize the fender.

While at mom and dads, I attempted to jack the boat off the trailer bunks, one end at a time, so I could apply anti-fouling wax to the hull. I’ve done this operation before, using the wheel jack at the front of the trailer. However, on this occasion, when I’d nearly lifted the hull free of the trailer, something inside the jack stripped out. I ended up purchasing and installing a bolt-on pivot jack, and finished the wax job with the aid of my truck jack, which I should have used in the first place.

Next problem occurred on the drive to Phoenix. We left at 5:30 am to avoid getting stuck in the LA freeway traffic. We stopped for breakfast in Banning. I checked the trailer, and discovered that my aluminum angle bracket had failed, and the fender was once again attached at only one end. To make matters worse, the jagged end had started sawing through the tie down strap. I repositioned the strap and we continued our drive toward Phoenix. About an hour out of Phoenix, I made one of my periodic mirror checks of the trailer, and found myself looking at an exposed tire where my broken fender had once been. The whole thing had broken free. I stopped at the first opportunity, and was relieved to find that no damage had been done to the boat or to the trailer lights when the fender broke free. To top things off, I picked up a nice rock ding in the windshield about 30 miles further on. 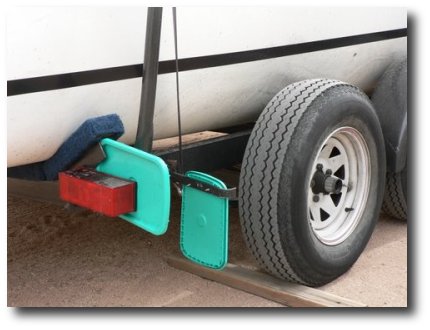 Upon arriving at my sister’s place in Chandler AZ, I located a windshield repair place and got the ding sealed. By the time I got back to the house, my brother in law had ingeniously fabricated a steel bracket, to which he’d bolted a makeshift mud flap out of a plastic bucket lid. It looks rather crude, but does quite a good job of covering the tire tread from the rear. Hopefully, the cops will not find fault with this setup. I probably won’t be able to do a more complete repair until after we return home. I brought quite a few repair and replacement parts along for this trip, including a spare tiedown strap, but a spare trailer fender wasn’t one of them.

Tomorrow, we will cross the border. We’ll rise fairly early, fix breakfast in the boat, then drive to the Nogales area. We’ve done lots of homework, and will learn then whether we’ve got it right. Hopefully, by this time tomorrow night, the boat will be floating in a slip at the San Carlos Marina.