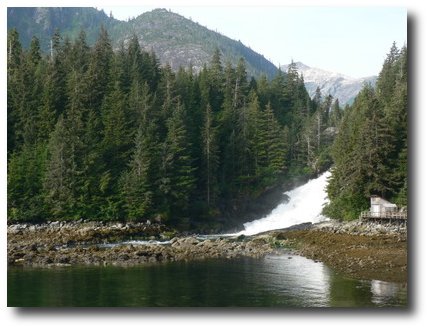 I rose to another beautiful day, thin high overcast to start with, which quickly burned off in favor of clear blue sky. While eating breakfast, Sandy and I were entertained by a river otter who cruised around the float, and even climbed up onto the floatplane dock, looking for goodies. After breakfast, we walked out along the boardwalk to get pictures of the falls in full sunlight. I just happened to have my fly rod along for one last fling at those salmon, and my efforts were duly rewarded. We finally pulled out around 9:45 am, and found Chatham Strait rippled with a light breeze. After making our turn south I found enough wind to warrant raising the main for some motor sailing. As we proceeded, the wind picked up, a north wind at our backs, so I set the jib, rigging the whisker pole to allow us to sail wing on wing without running the engine. Our speed initially was about 3 knots, but soon we were doing 4, then 5. By this time we had a pretty good trailing sea running, so it was a bit bouncy. The wind was also quite chilly, and the sails blocked out the sun. Sandy went below for relief from the bounce of the boat and to warm up. The wind continued to strengthen, and we started surging ahead, at times at speeds better than 6.5 knots. Sailing downwind at this speed was quite taxing, since the wind kept shifting a few degrees, back and forth, and also because I needed to maintain a heading to clear a point up ahead. The main was out to the port side, and the wind kept backing to port. With the whisker pole set, a controlled gybe to bring the main over to starbard, and jib to port, was a bit of a task. I felt relieved when the wind shifted a little to starbard as I neared the point, and I was able to maintain a comfortable distance offshore. I had sailed about 15 miles wing on wing, constantly checking the wind directional vane at the top of the mast and watching the main for luff, left hand on the main sheet to quickly haul in if she started to gybe.

We were within a mile of the entrance to Red Bluff Bay, our destination, when it happened. Bang! With no advance warning an abrupt wind shift caught the main and she gybed across. Major problem, doing 6 knots with a 4 foot following sea, and both sails full out. I cut both sheets, started the engine, and came about, into sea and wind. Sails flapped loudly, uncontrollably luffing. Of course, Sandy was rudely startled by this abrupt turn of events, and rushed into the cockpit. I handed her the wheel and quickly dropped the main. I then turned attention to the jib. With all the chaos, the jib had jerked the whisker pole free from the mast, but was still attached to the sail. I retrieved it, unclipped it from the sail and passed it back to Sandy. With the pole removed it was a simple matter to roll the jib up. We turned back on course and motored the last bit into Red Bluff Inlet.

I thought we had escaped this incident unscathed, but later, when getting ready to put the whisker pole away, I noticed that the plastic tab for the spring clip which holds it in place on the mast was missing. Apparently when it broke loose, the tab tore out. I hope I can get a replacement part, but in the meantime, we will be sailing without benefit of that pole. 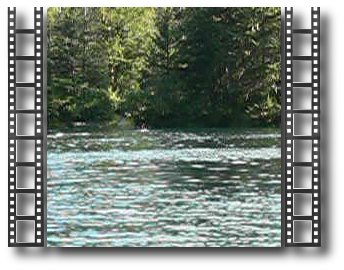 We were grateful to reach the shelter of Red Bluff Inlet, which is described in Douglas as one of the scenic highlights of Southeast Alaska, combining rugged peaks, snowfields, and waterfalls in a most spectacular fashion. As usual, Douglas was right on the mark. We marveled at the landscape as we followed the narrow passage into the inlet. We proceeded in to the recommended anchorage, near the head of the inlet. It is a well protected nook. A fishing boat attached to the excursion yacht we passed on the way in was there, and the young guys aboard were having a ball fly fishing for pinks. The water in this cove was simply crawling with fish. Huge schools milled around, fish jumping everywhere. The more we looked, the more fish we saw. After anchoring we went out in dinghy for an explore. This inlet holds more fish than I knew existed. Massive schools, revealed by incessant jumping. At times it looks like popcorn popping in hot oil, every pop a fish. I fished some, and caught some, but mostly we just watched the spectacle. Typing this at well past 10 pm, I can still hear them outside the boat, jumping and splashing. I wonder if they ever rest.