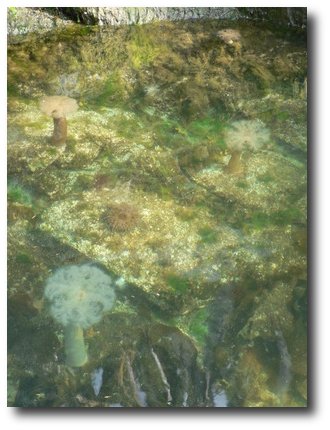 Bright sunny morning, slight swell sneaking into our protected anchorage from outside. I ran out in the dinghy first thing to pull the crab trap. Only thing I caught was 3 sun stars. Back in the cove we went for a dinghy explore along the shoreline at low tide. Wonderful sea life was visible from dinghy in very clear water. We pulled anchor around 9:30 am and cruised out onto Chatham Strait. Light breeze out of the north. I unfurled the jib and raised the main. We shut the motor off and sailed south along a spectacular shoreline. The east shore of Baranoff Island is very mountainous, and indented with frequent inlets. Glacier covered peaks are visible above the inlets. The breeze pushed us along, wing on wing, at 4 knots for about 5 miles before slacking off. We continued sailing at reduced speed all the way to the entrance to Warm Springs Bay. I removed the whisker pole and we turned into the bay. We sighted the beautiful falls at the head of the bay, and the public float where we tied up, next to a big motor cruiser. We grabbed swim suits and walked up the trail to Baranoff Hot Spring. This spring is the most wonderful we’ve visited thus far. It is a series of 3 pools located immediately adjacent to a raging river. The first pool is extremely hot, a reported 120 degrees. The next pool has a flow of cold river water piped in, and is 105 degrees, perfect for soaking. A lower pool has river flow into it, and is too cold for soaking at this river stage. We luxuriated in the middle pool, and I managed to get into the upper one for a little while. The setting for this hot spring is magnificent.

After our soak we walked back to the little store located just above the float. They have a few locally made gifts, plus ice cream. They also have internet, so I’m typing this up quickly, so I can e’mail it out from the remote location of Warm Springs Bay, Baranoff Island, Alaska. Ain’t technology amazing! 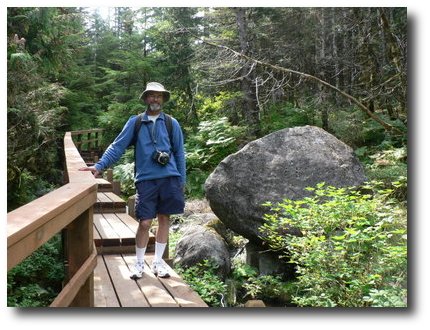 I hurried with yesterday’s notes, so I could take advantage of satellite e’mail at Baranoff before the store closed, around 5 pm. After sending log entries off to Ken via techno magic in the wilderness, I walked back down the boardwalk toward the boat. I noticed a guy down below, at the edge of the bay, near where the river at the base of the falls enters the saltwater. He had a fly rod. I thought, boy is he wasting his time. I walked a bit further and threw a haughty glance back, only to spy him playing a salmon. I stopped and watched. Big schools of pinks were cruising the shoreline, and whatever he had on the tip of that fly line was getting results. Time and again he would hook and release 3 to 5 pound pinks. He was having a ball. I thought about that backpack fly rod stowed in the boat, and the automatic fly reel with floating line. I also thought about my heavily stocked fly box which had inadvertently gotten left at home in the flurry of packing up. I gave up thoughts of joining in with the fly rod.

Back at the boat I struck up a conversation with the Kake Indian fishing guide, attached to the megayacht Revelation, which was tied up to the float. He showed me the kind of fly the fisherman was using: a red headed jig. My old fly fishing instincts got the best of me, and after dinner I pieced together the little 4 piece fly rod, attached the reel, and poked into my tackle box for anything I could cast with a fly rod, which might attract a salmon. I came across a packet of plastic hoochies, little squid imitations, which my old friend and savvy outdoorsman, Don Johnson, had given me. Inside was a little tiny hoochy, with a pair of small hooks and leader already rigged up. It was green, instead of red, like the guy was using, but I tied it on anyway, and trooped down to the water’s edge. I fished next to the guide, who had come down for some evening fun as well. He started hooking fish with regularity, laughing aloud with every hookup. He was thoroughly enjoying himself. I cast and cast, and finally started getting some hits, and then I hooked up. On a light fly rod a 4 pound pink salmon puts up a strong fight. I caught two before calling it an evening.