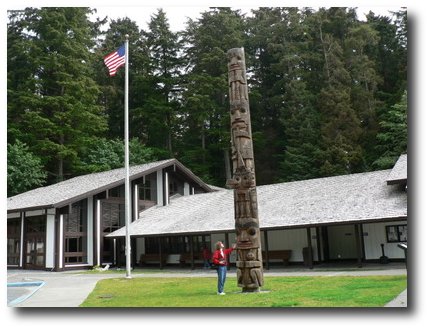 Layover day in Sitka. Forecast was for strong winds and rain by evening, so we opted to do some sightseeing, while the walking weather was still good. We wandered back into town, and visited Castle Hill, sight of a Tlingit fortress, later developed by the Russians as a fort. Great view of Sitka and environs from there, with numerous informative exhibits. We lunched in a nice second floor cafe, excellent food and a nice view of the water. We walked lunch off with a stroll down to the National Historic Park, which features a very attractive visitor center as well as the historic site of the Battle of Sitka, between Baranoff and the Russians and the Tlingit Indians, fought in 1804. It’s a very interesting story of a relatively small skirmish which the Indians very nearly won. If they had, the history of Alaska might have been very different. Just beyond the battlefield area, Indian Creek flows toward the bay. It was literally choked with pink salmon, on their run upstream. We were told that this year’s run of pinks is turning out to be one of the heaviest in recent memory. The sight of these fish actually darkening the shallow stream with their numbers is a sight to behold.

It is a short walk from the visitor center to the Sheldon Jackson museum, which houses an outstanding collection of Indian and Eskimo artifacts within an octagonal concrete building, constructed by Sheldon Jackson in the late 1800’s. We caught a bus ride from there to the grocery just above the marina, picked up some steaks for the barbque, and returned to the boat for dinner and a movie.

I secured the boat well before turning in, and around 11 pm the forecast wind started picking up. It has been a moderate blow thus far, not too bad, but nonetheless a good time to be tied up in a slip. Tomorrow we’ll organize provisions and I’ll try to trouble shoot my engine starting problem.