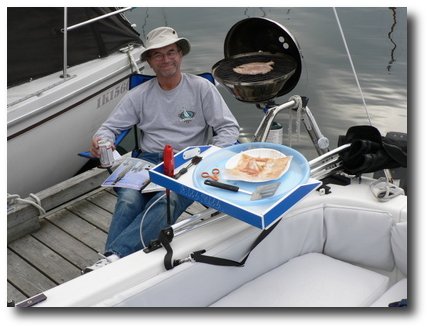 Long run today – 66 nm. We followed the other boats out from Blind Channel Resort, and took advantage of the ebb current through the rapids. No difficulties. Really enjoyed the push at Whirlpool. The boat increased speed from 7 knots to 11 kts for a while. Entered Johnstone, which was very tame. Decided to modify our route and continue on Johnstone, instead of ducking back into more protected waters. Longer way around, and it would probably have taken an extra day, with uncertain conditions on Johnstone. Best to pass the difficult water when the seas are calm. We cruised up the Vancouver Island side of the Strait. Very pleasant cruise. Slowed at Robson Bight, famous for its beach which attracts Orcas. Seems the place has small stones that the Orcas like to rub against. Unfortunately, none were there while we were in the area. Had to add engine oil 6 miles shy of Alert Bay. Continued on to Port McNeil, where we hoped to find a Fed Ex package from Leavenworth, containing the cruising guide and laptop power cord accidently forgotten at trip’s start. Pulled into the fuel dock around 2 pm and filled tanks. Fuel consumption much lower (3.7 mpg) because of high running speeds. Ran 3500-3800 on first 12 gal, 3000 on second tank. Must keep rpm below 2500 for long distance runs.
Called the harbor master by radio and got a marina slip. Went up to pay and was delighted to see that the package had arrived. Way to go, Nathan and Ken. Now we’re back in business. Went for a walk around town that evening, and barbqued at the dock. Had strawberry/ruhbarb pie at a nice little restaurant overlooking the marina.