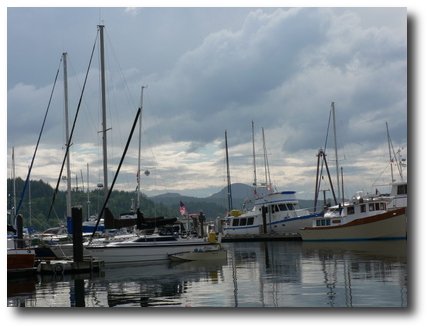 prepare for run up to the rapids. Transferred 5 gallons to each main tank from jerry cans, which left the main tank in use nearly full. Don’t want to have to switch tanks in the middle of the rapids. Also filled the oil reservoir. Overcast again, light rain to start the day. Had to be underway by 7:30 so as to arrive at Yucultas near slack around ll am. We hit the change to ebb, which worked out perfectly. We ran Yuculta in the last hour of ebb, then pulled into Big Bay to wait for Gilliard and Dent to be closer to slack. Big resort under construction at Yuculta, and much development in the area. Watched a couple of float planes bringing guests in. Finally headed on through Gilliard with the current still running, and got a boost all the way to Dent Rapids. This place has a nasty reputation, but we timed things just right. It’s supposed to be much more difficult on a change to flood. We observed strong currents, but none of the famous whirlpools and overfalls. Nice run to Blind Channel Resort. Encountered strong and swirling currents in Mayne Channel, near the resort. This time the current was against us. Pulled into the resort fuel dock. Very helpful young guy took our lines and assisted with fueling. Used 21.6 gallons for 129 miles, 6 mpg average. Very good. Got a slip at the marina and went for a hike on one of their trails into the woods. Beautiful hike, accompanied by their very friendly dog. After our hike, we showered and fired up the barbque for a dock side dinner. Visited with other boat captains at marina,also heading north. Maybe we’ll see them again, further along. All are leaving early (5 am), to time the Greene Point and Whirlpool rapids, and arrive reasonably early on Johnstone Strait. Johnstone is notorious for rough water in a northwesterly blow, which is typical. June 9 is forecast to have favorable conditions on Johnstone, so we will join them for a 5 am departure. We met High Time,BC, Simpatico (going to Alaska), Meu Barco (also going to Alaska), Angelena (going part way up), and Amazon – a lovely Catalina sailboat.