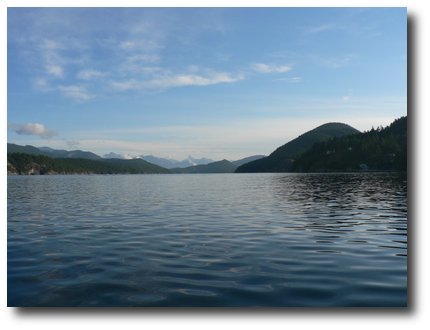 Raised anchor about 7 am and left the anchorage. Conditions calm. Skies overcast. Ran up Strait of Georgia at 6 knots. Emptied 12 gal tank at Powell River (67 nm on 12 gal – 5.6 mpg). Passed through Copeland Islands near entrance to Desolation Sound. Many more homes on mainland than when here 19 years ago. Headed for Talbot Cove at mouth of Teakerne Arm, where we had anchored with Ringsruds in 1986. Large oyster farm has moved in at the mouth of Talbot Cove. I tried 4 times to get the anchor to hook. Rather deep and rocky, couldn’t get it to set. We moved to a little nook to the west and I got out the hose reel with 500 feet of 3/8” poly stern tie line. While Sandy kept the boat clear of rocks, I rowed in with the line and looped around a tree, then brought the line back to the boat and tied off. I then rowed to the opposite side of the little cove and tied another line to a tree. By drawing the slack out of the two lines, we were secured in the center of the cove. Went for a short walk up the new logging road at the head of the cove. Watched 3 otters playing in the cove. Lovely sunset, but we were a little too far around the corner to fully appreciate it. Double checked the cruise guides and charts regarding timing and strategy for passing the Yuculta rapids, coming up the next day.