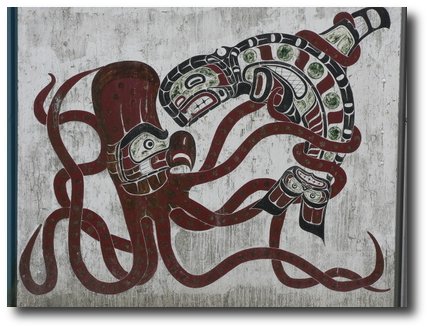 Layover day in Port McNeil. Tried to do a laundry at a motel at the top of the hill (one across the street from the marina is closed). Both machines in use, and we must catch the ferry across to Alert Bay, so will do laundry later. Took the ferry over to Alert Bay, an Indian community. We visited the burial grounds near the waterfront. Beautiful park with many old totem poles marking the graves. Not allowed to walk within the grounds, so we observed from the street. We next walked the other direction, to the U’Mitsa museum. The museum is built in the form of a traditional long house, and it contains a remarkable collection of potlatch masks and other cultural artifacts. The story is a sad one with a happy ending, of sorts. In the early 1900’s, the government and missionaries tried to abolish traditional lifestyle and ceremonies, including the potlatch. A law banning potlatch was passed. One tribal member ignored the law and held a big potlatch over Christmas, in 1921. Authorities got word, and ended up confiscating all the tribe’s ceremonial masks, coppers, and other items. They were taken to the national museum in Ottawa. Some of the potlatch organizers were jailed. Nearly 60 years later, most of the items were returned, and the Indians built a museum to house them. They are very proud of this museum, and it is a focal point for rebuilding their cultural heritage.

There was a huge yacht anchored in the harbor while we visited. It had a helicopter and a 32 foot sailboat stowed on deck, and also contained a 30 foot power cruiser. About 15 European millionaires were its passengers. We visited with a totem pole carver near the museum, who does wonderful work. He has customers all over the world.

We had dinner at the restaurant in Alert Bay, while waiting for our ferry. After getting back to the boat, Sandy did the laundry, while I took the porta-bote dinghy apart at the dock, and stowed it on board for tomorrow’s planned crossing of Queen Charolette Strait and Queen Charolette Sound. Hit the sack early, with an early start planned for next day.