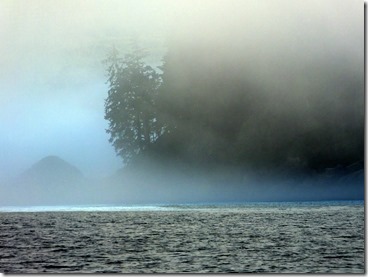 Light swell entering our anchorage through the night, but not enough to be uncomfortable.  We rise at 4:30am, eager to start our last long leg of the trip, our run down the Strait of Juan de Fuca to Victoria.  A fading half moon greets us when we emerge from the cabin to prepare for departure.  Whisps of fog hang out over the bay, but they offer no clue as to what awaits us on the outside.  I set careful waypoints on the GPS, so as to avoid Cervantes Rocks, which guard the southeast entrance to our inlet.  As we near the mouth of the inlet the fog thickens.  I have my running lights on, but I see a fishing boat heading out with no lights showing, and we watch for others.  Once we clear Cervantes Rocks we swing out onto the Strait of Juan de Fuca and 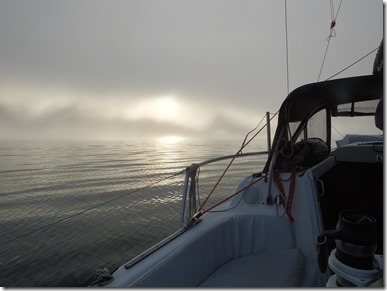 turn eastward, on a course which parallels the shore.  The day begins to brighten, however, the sun remains obscured by the thick fog.  I must steer with the GPS, and I try using my cross track error for reference.  However, the delay factor makes this difficult, and I actually manage to swing 180 degrees off course at one point.  Once I get headed in the right direction, I give up on looking at the water at all.  I simply stare at the GPS, steering with the tilt of the course line while Greg keeps scanning the water around us for debris and other boats.  Eventually I give the auto pilot a try and, with the light wind and swell, the auto pilot ends up steering much better than I can.

I can see boats which transmit position via AIS, but not all boats send this signal.  Our visibility ranges from 50 to 100 yards for hours at a time.  Occasionally the fog thins and we can see the brightness of sunlight overhead, however down at water level, our view remains obscured.  When the sky brightens, a moonbow of refracted light appears as a ghostly arch, low, above the water.  We take turns at the helm and, with practise, improve our ability to steer.  We’re running at 3200 rpm, and with the smooth water surface and gentle swell, we’re able to make 6 knots at first.  By 7am, however, our speed begins to pick up, and soon we’re averaging 7 knots or better.  We’re enjoying the benefits of a flood current, and it continues to build over the course of the morning.  Occasionally we’re passed by other boats heading our direction.  It’s startling when they loom up on our beam from behind.

We’re amazed by the speed we’re able to sustain.  A slight tail wind begins to push us, even without sails up, and as we near Race Rocks Passage the flood gains strength.  Our speed increases to 7.5 knots, and once we enter the Race Rocks Passage it peaks at just over 8 knots.  The sea surface begins to get choppy, and then seriously disturbed by the speed and volume of water flowing eastward through Race Rock 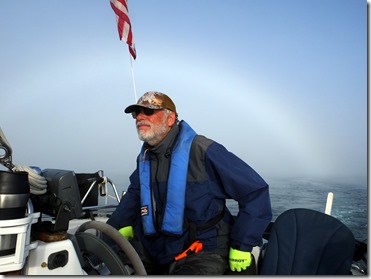 Passage.  As our speed reaches its maximum, the veil of fog abruptly lifts.  It’s almost as though we somehow manage to pierce through from another dimension.  We’ve been cruising in fog for more than 40 miles and, suddenly, in the space of a few minutes, we transition into cloudless sky and bright sunshine.  To add to the effect, we’re running at close to the speed of the wind, so the air feels quite still.  We begin peeling off layers of clothing.

Our next waypoint is the entrance to Victoria Habour.  After nearly 1000 miles of cruising in remote and even wild places, we’re about to enter a completely different environment, an 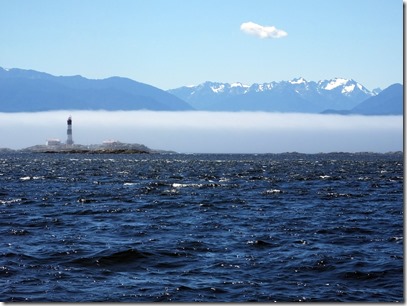 urban waterfront.  Boat traffic begins to increase, and float planes are taking off and landing in close proximity to boats.  I radio the Wharf Street Marina and get instructions on how to find our spot.  It feels great to tie up, with the last major leg of our trip behind us.  We plan to stay here 3 nights, before moving over to Roche Harbor for our return to the US.  The weather is supposed to be rough tomorrow, so it’s good to be here, with the boat secure while it blows outside.  Our run today has covered 54 nautical miles, and we’ve averaged 7 knots for the entire passage, and almost the entire distance in fog.

After a lunch of grilled sausage at the boat, we head out on foot to sightsee.  Our wanderings take us to the Provincial Parliament Building, where we go on a tour.  Afterwards, we grab dinner at a pub.  We talk about the trip, and the remarkable experiences we’ve had.  It’s hard to believe that it’s nearing an end. 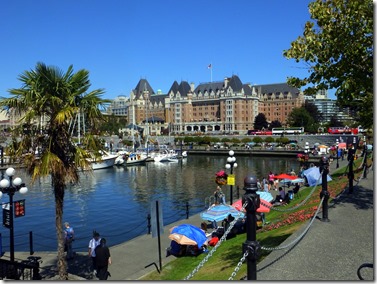