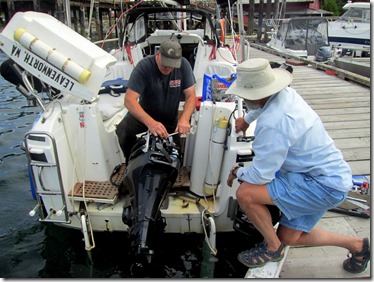 I get up around 6:30am and John is already working in the office.  I step in and ask him about the Suzuki mechanic in East Bamfield, which we learned about last evening from another boater.  I ask John if he knows when the repair place opens, and am disappointed to learn that they don’t open till 9am.  We’ll just have to knock around and wait.  I glance around the office, which includes a small fishing tackle store and see that they have a good price on downrigger cannonballs.  We use some of our spare time rerigging the downrigger with new cable, snap release and that 10 lb cannonball.  We won’t be doing any more fishing on this trip, but it will be ready to go next time.  Shortly after 8 we uncleat the boat and putt across the inlet to the public dock in East Bamfield.  We walk up to Breaker Marine and they indeed are closed till 9am.  I walk around to the side and see the service bay door open, with a pickup pulled 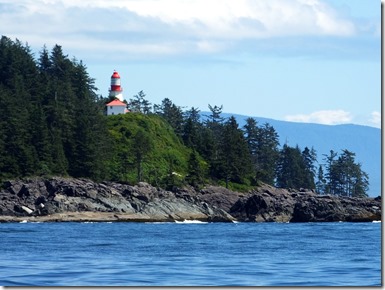 halfway in.  A pair of feet are sticking out from under the truck.  I lean down under the truck and ask “Would you happen to be the Suzuki mechanic?”  Gordie, for that happens to be his name, replies in the affirmative.  I explain our situation and ask if he would be able to take a look at the motor.  He says “Sure”, but explains that he first has to finish changing the oil on this truck and get a couple of other things done.  He’ll be down in about an hour and a half.  He’ll come down to the boat as soon as he can.  Ninety minutes later, Gordie briskly walks down the ramp and onto the floating public dock where the boat is tied.  He goes through a carefully sequenced series of checks, and quickly determines that the thermostat is stuck open and number 2 cylinder isn’t working properly.  The plug is fouled.  He proceeds to replace all 3 spark plugs, installs a new thermostat, and cleans the injector for #2.  He rules out a problem with the coil and concludes that, most likely, I have a valve problem with #2, maybe a stuck exhaust valve.  He’s able to get a little response from the #2 cylinder, but it’s still not carrying its full load.  That’s about all he can do under the circumstances, but he feels that we should be able to get home with the engine in its current condition.  I’m grateful for his expertise and efforts.  I settle up at the store, and we’re finally clear to go.

We have a long 42 mile run ahead of us, and our projected arrival time at Port Renfrew, the only place along this stretch of coast where we can get off the big water, will be at least 6:30pm, and very possibly later.  With some anxiousness I advance the throttle and bring her up to speed.  We’ve decided to run the ballast out of the tank and rely on engine alone.  The lack of ballast, plus having the dinghy stowed on the foredeck, will ease the load on the engine, and should allow us to move a bit more quickly.  I run the throttle up to 3200 rpm and we initially make over 7 knots.  Out on the open 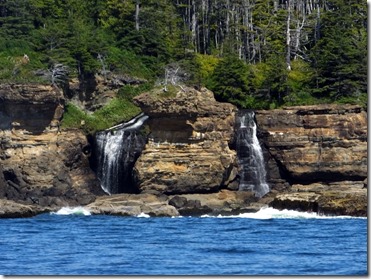 ocean our speed varies widely, depending on whether we’re climbing or surfing down the big following swells, which average 4 to 6 feet, with some higher than that.  A 10 knot n0rthwest following wind helps push us along.  We set our course for point to point, which gives us the shortest distance.  This is an interesting coast, very rugged and remote, with sea caves, rugged cliffs, and waterfalls which cascade right onto the beach.  A popular hiking route runs all the way from Bamfield to Port Renfrew, and we see a few hikers walking along on the beach. 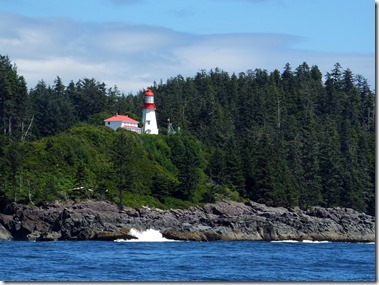 This trail was originally built to aid shipwreck survivors to be able to walk to settlements.  Distinctive lighthouses are sited on the major promontories, adding points of interest.  We see a few sea otters and dolphins, and but one gray whale.  Only a handful of other boats are out traveling on this afternoon.  We would have preferred starting this run early in the morning, when conditions are typically more settled, however, we’re grateful to be moving at all, and especially grateful that the engine is steadily grinding away.

The wind is beginning to pick up by the time we near Owen Point, at the west entrance to Port San Juan inlet, where Port Renfrew is located.  Our arms are sore from the hours of manual steering, and we’re looking forward to our delayed supper.  The wind and swell follows us in to Port San Juan inlet, and we wonder if my old anchorage behind Woods Nose will be usable.  I’ve read reports that it may be filled with crab floats, which would force us to go further up the inlet to a marina, whose office is surely closed by now.  We’re in stong winds right up the entrance to the small cove behind Woods Nose.  No one is anchored there, and I see no crab floats.   Almost by magic, once we turn in behind the tall trees on Woods Nose and adjacent shore, the wind drops, and it’s nearly calm in the little cove.  I drop the anchor near the center of the cove.  It fails to grab on first try, but I get it to hold on the second.  It’s time for dinner and a bit of decompression.  We have much to be thankful for on this day. 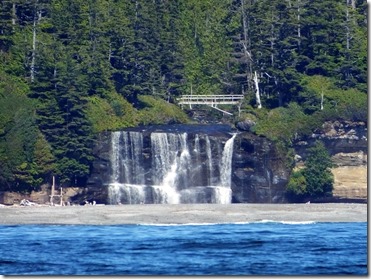 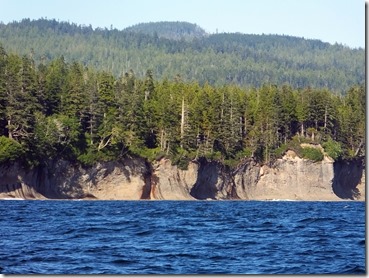 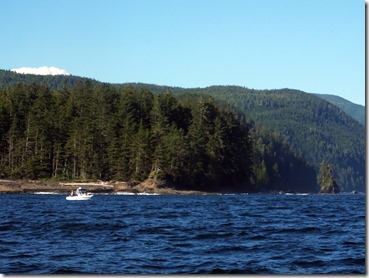 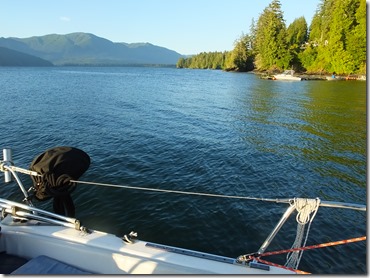 One thought on “July 25, 2019–Delayed Departure For Our Dash to Juan de Fuca”