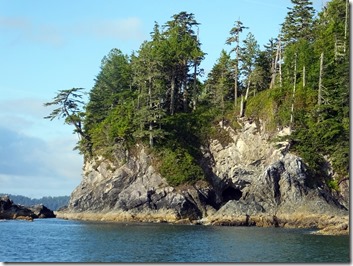 Our protected anchorage is completely calm when we rise.  The two rafted power boats are gone by the time we peek outside.  We get underway a little after 8am, and take a wandering course through the Broken Islands, opting to steer through the narrowest of passes, just for fun.  The scenery is captivating, with overhanging vegetation cropped flat by the high tide saltwater where trees lean out over the water.  Sea caves pock the rugged rocky shores, evidence of the erosive power of surging seas.  We head for Effingham Bay and anchor deep in the 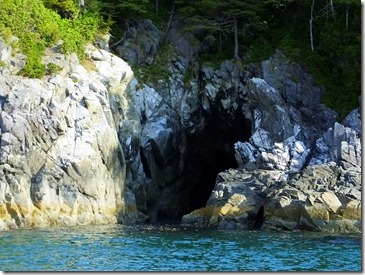 inlet, close to where the trail across the island begins.  After dinghying ashore, we seek out the marginally defined trail through old growth rainforest.  The way is creatively marked by strands of string, pieces of rope, the occasional shoe, plastic bottles, and fishing buoys which have been periodically tied to branches.  After walking close to a mile, we emerge from the forest and descend to a bouldery shoreline, lined at highwater by enormous driftwood logs.  We scramble over rocks and logs to reach a sand beach.  In the forest above the beach are a series of small grassy flats, where Indian cedar houses once stood.  We proceed further up the shore, hopping across boulders exposed by the low tide.  After about a half mile we reach a large sea cave, which extends deep into the cliff.  It’s entrance is probably 30 feet in height, and the walls are gracefully adorned by hanging clumps of ferns.  Out in front of the cave we find fascinating tide pools which provide homes for seastars, anemones, barnacles and tiny fish.

Upon returning to the boat, I pull the anchor and steer a course toward Clarke Island.  We anchor just off a beach which is covered with kayaks.  Probably 8 or 10 tents are pitched just above the beach.  This is obviously a very popular place for kayakers to camp.  The scenery easily justifies its popularity.  We eat lunch and then go ashore for a beach walk.  The only thing which spoils our enjoyment of this place is the stumble which the engine developed shortly before reaching the anchorage.  It’s our same old problem, drop in rpm, quickly resolved by 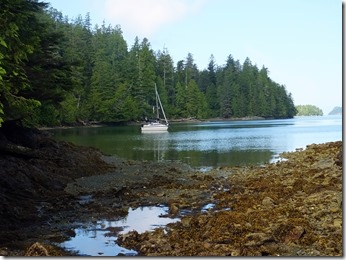 squeezing the primer bulb.  We really thought we’d resolved that problem with the gas line simplification we’d done the other day.  Having run 25 miles yesterday without a hint of trouble, it’s very discouraging to find that the engine is still struggling for fuel, on a very erratic basis.

We begin our run across Imperial Eagle Channel toward Bamfield in mid afternoon.  I’ve called ahead for a tie up at the Harbourside Resort.  We have to give the bulb a squeeze several times across the channel.  We can’t figure out what’s causing this behaviour.  It happens at both 2800 rpm as well as at 2300 rpm.  We’ll simply go with what we’ve got and make the 2 day run toVictoria with periodic squeezes of the bulb.

At Harbourside, we top off the gas tank and tie up for the night.  We’re moored on the side of a barge, tied to enormous cleats.  This is mostly a fishing resort, and the fish cleaning stations are really busy, with large salmon being carved up.  The owner checks weather for us.  Tomorrow looks like an excellent travel day going down the coast to Port Renfrew, and Friday looks good 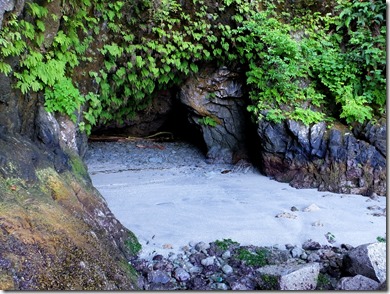 as well, with light winds until around 3pm.  Saturday, however, is forecast to be nasty all day long, including early in the morning.  Our strategy of going just as far as Sooke on Friday, and then running into Victoria early Saturday morning doesn’t look like a good idea.  Instead, we’ll try for a very early start on Friday morning, hoping to make it all the way into Victoria by around 4pm.  We’ll likely be seeing wind kick up around 3pm, but it shouldn’t be as bad as Saturday morning.

In preparation for the long runs of the next 2 days, we haul dinghy up onto the dock, deflate her, roll her up and tie her down on the foredeck.  This will help considerably for our long runs, reducing drag and easing the load on the engine.  Also, if seas get rough, we won’t have to worry about dinghy taking on water.  The trip is definitely working toward its conclusion.  Our days of dinghy explores and trips to remote beaches are at an end.  We’ll be either going from dock to dock or anchoring with no means of going ashore from here on in. 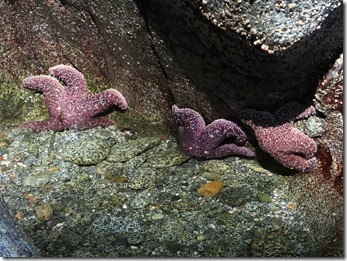 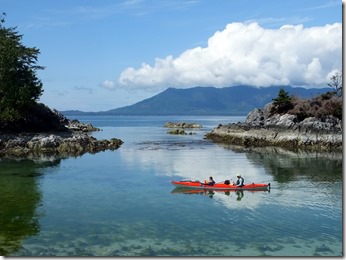 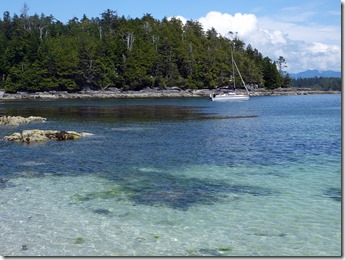 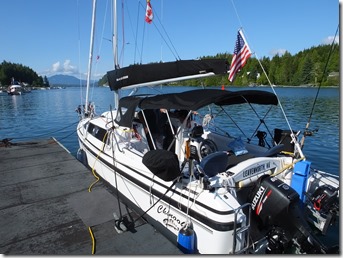