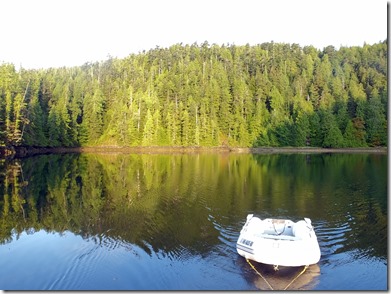 I’m forced to get out of bed in the middle of the night to solve a minor, but recurring problem, and am greeted by a nearly full moon beaming down into our little cove from a cloudless sky.  This bodes well for our planned outside run once it gets light.  We’re up by 5:45am, and underway by 6:30, as planned.  It’s a very brisk 51 degrees thanks to the clear overnight sky, however, it’s an acceptable trade, since the sun will soon be up and warming us.  The seas are flat to start with, but as we reach the mouth of Nootka Sound we begin to pick up the swell, 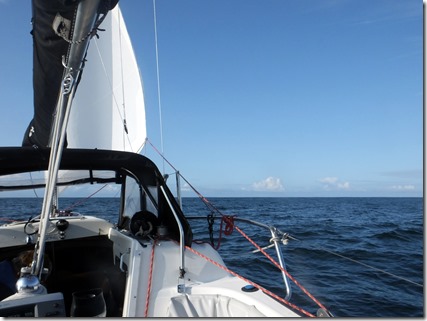 which is running at 3 feet to begin with.  This is a consequence of the rainy and windy weather of the past couple of days.  It will take a day or so of calm weather for it to really settle down, but we won’t wait for that to happen.  We should have both wind and seas behind us today, so the ride shouldn’t be too uncomfortable.

We initially swing a few miles offshore, because a gnarly assortment of rocks guard the southern approach to Nootka, and we must seek deep water well beyond them.  We nose into the swell to begin with, but once we can swing our turn southward, the swell is more on our stern quarter.  I’m able to put out a jib, which helps the ride for a short while, but once the wind eases, I’m forced to roll it back in.  We make another course adjustment, again further to the south, once we bring Perez Rock off our port beam, and we now have a sailing wind in our favor as we parallel the shore of Hesquiat Penninsula, about 3 miles offshore.  I raise the main and set a preventer, since the wind is uncomfortably close to directly astern.  I open up a partial jib, but it causes trouble, being somewhat backwinded by the main.  We see the Estevan Point lighthouse from a considerable distance away, and once we pass the lighthouse, we’re able to head due east, toward the entrance to Hot Springs Cove.  This last leg is 11 miles in length, and with the wind directly behind us, I’m able to set the main on the starboard side, with a preventer, and I open a jib on the port side.  The wind angle enables us to keep the jib filled without use of the whisker pole, which is nice, since the following seas are running 4 to 5 feet at times, 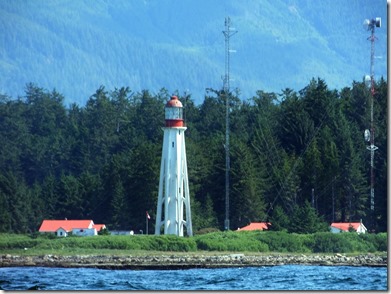 and I don’t enjoy getting up on the cabin roof in those conditions.  While we’re motorsailing along at 5 1/2 knots, we listen closely to the VHF, since we hear a MayDay call from a guy in a 26 foot power boat, who’s struck a submerged object up on Nootka Sound, where we departed from this morning.  He’s taking on water and the bilge pump isn’t catching up.  He says the boat will sink unless someone can reach him in time with an additional pump.  The Canadian Coast Guard puts out a call for nearby boats to render assistance, and they end up dispatching a rescue helicopter.  We later hear that he’s managed to slow the flow of water into the boat, and the pump is keeping up.  He thinks he can make it to Gold River.  Someone is escorting him there just in case.

A little after noon we draw near to Hot Springs Cove.  Time to lower the sail and head for the dock.  It’s been a rocking and rolling 6 hours, so we look forward to sheltered water and a 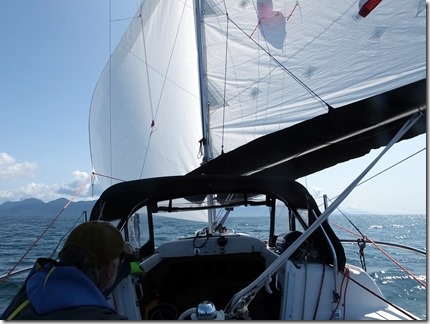 secure dock.  As we pass the hot springs, we see a large number of bathers climbing all over the rocks at the springs.  Float planes have been shuttling in all morning, and we start encountering numerous excursion boats coming and going.  Once we’re docked, we talk with one of the boat drivers.  He says there are probably 100 bathers over at the springs in midday.  This is a major increase from when Sandy and I were here 5 years ago.  It’s really been promoted.  I ask when the last commercial group is likely to leave, and he tells me probably around 7pm, since it takes 1 1/2 hours for them to get back to Tofino.  Greg and I plan to fix dinner around 5pm, and head up the trail to the hot springs around 6:30 for an evening soak, hopefully without quite so many people to contend with.

We finish with dinner by 6pm, get into our swim suits, grab towels and head for the trail to the hot springs.  The trail itself is a wonder, winding its way through a beautiful rain forest, cedar boardwalk for its entire 1 1/2 mile length.  What makes it even more special, for decades now, cruising boaters have carved their boat names and dates of visit onto the boardwalk planks.  Some of these carvings are extremely artistic and elaborate.

Our timing for visiting the hot springs couldn’t have been better.  The last of the afternoon crowd is leaving by the time we start up the trail.  When we get to the hot springs, only 2 bathers are still there, so we enjoy this very special place in almost complete solitude.  We stand beneath the little hot water waterfall, which serves as a delightful outdoor shower, and soak as long as we wish in the pools below.  When we’ve had all the hot water we can take, we  climb back up to the changing room, and then begin our walk back toward the boat.  On our way out, we’re passed by at least 20 people, just starting on their way in.  I’m sure they were all thinking that by going in late, they’d have the place all to theirselves.  Unfortunately for them, a whole bunch of others had the same idea.  We can’t believe our good fortune in timing our visit to the hot springs.  The soak has been incredibly invigorating and we both feel great. 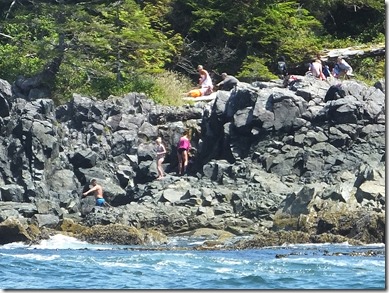 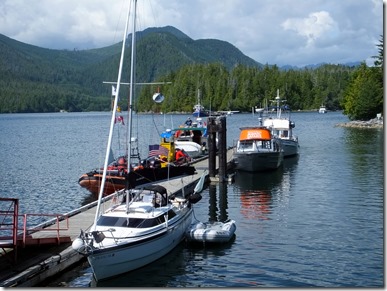 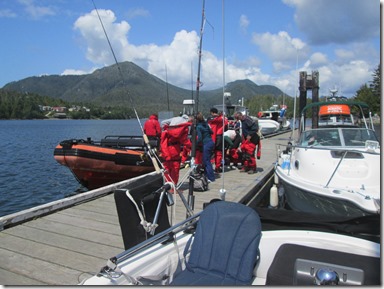 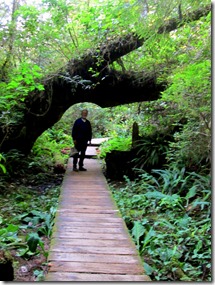 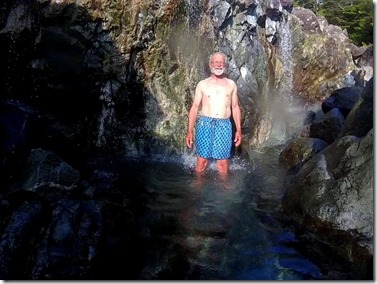