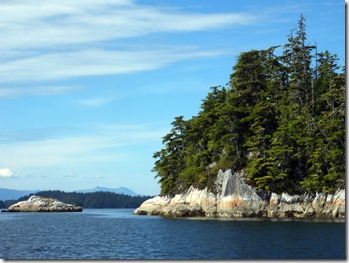 Today is to be an easy day.  We fix up a fancy breakfast:  cheese omelet with bacon bits, juice, coffee, and toast with jam.  I say a brief hello and farewell to Pierre and we’re off.  We poke along down Cramer Passage, headed southwest.  We pause for a half hour or so to fish in the Fox Group, with no luck.  It’s time to cross Knight Inlet and work our way through a scattering of small rocky islets toward our destination of Village Island.  We anchor in the little bay just north of the abandoned and deteriorating Mimkwamlis village site.  A local First Nations Band has assumed the role of Guardian for this important cultural site, and they have recently constructed a new dock and headquarters building.  No one is here when we arrive, but while eating our 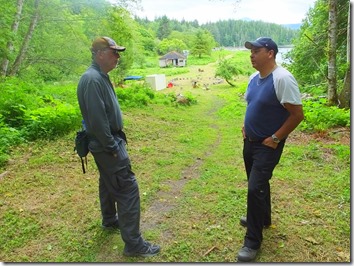 lunch on the boat, we see an aluminum boat tie up at the dock.  Several guys get out and head over to the headquarters building.  We cross the bay in the dinghy and tie up to the dock.  As we’re walking up the dock we’re greeted by two guys who had come over in the boat.  They introduce themselves as Jake, who turns out to be chief of his band and head of the Guardian group which is caring for this place, and Sean, who is an archeologist, working on an archeological survey of the island.  Jake welcomes us to Mimkwamlis and explains that they charge $20 per person to visit the island.  He offers to give us a guided tour.  We are glad to pay the fee and accompany him on a guided walk through the village site.

Jake explains that he is a blood relative of people who have lived here for uncounted generations.  He says the population has been estimated at 2000 people at one time.  Traditional cedar longhouses, facing the bay, once lined the waterfront along the bay.  Several families lived in each house, and the structures stood very close together, to maximize use of the space.  One day in 1921 all but two people from the village traveled to a nearby village to attend a potlatch.  While they were gone, a fire broke out and all but two of the longhouses burned.  Efforts to rebuild were made, but the fire took its toll on the village.  In the ensuing years, wood frame structures took the place of traditional construction, however, the fortunes of the village progressively declined.  It was finally abandoned in the 1970’s, with only occasional inhabitants spending time here after that.  The ensuing years  have been hard on this once thriving village.  The totem poles have all fallen, and once on the ground, they have quickly deteriorated.  One pole I saw on the ground 5 years ago still had the recognizable features of a wolf.  Today, no carved features can be distinguished, and it looks to be nothing more than an old rotting, moss covered log.  A couple of massive upright cedar longhouse 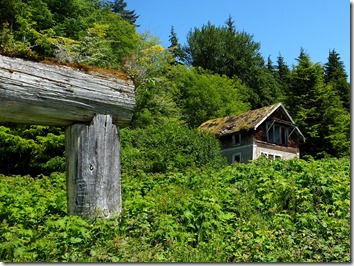 logs still stand, however, they will soon join the totems in simply adding nutrients to the soil.  We found the remnants of one longhouse support log, whose center had completely rotted out.  A very large tree is growing inside, and segments of the former cedar log surround the living tree, much like barrel staves wrapping around it.

After our tour, we tend our crab pot, which we’d dropped on our way over to the village.  We pull up a medium sized rock crab, but no dungeness.  We move the trap to a new location, still hoping for that first crab dinner.  It’s a warm afternoon, so we return to the boat, read a bit, and start to nod off.  Our naps are interrupted by a nearby “whooshing” sound, which I immediately recognize as a whale spouting.  We hear it again, and see a bit of spray, out in the main channel, just beyond the rocks which define our anchorage.  We grab cameras and hope 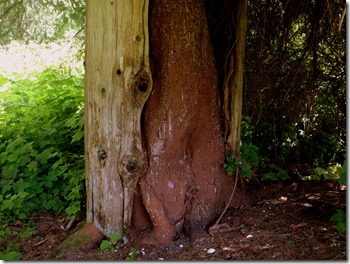 the whale will give us a view.  We next see him out beyond the rocks, and then he makes a turn into our little bay.  Greg shoots video on the Go Pro, and I try for still pictures.  Whales are difficult to photograph, but I finally get a decent picture when he surfaces a short distance from the boat.

After the whale departs for places unknown, I fire up the barbque and cook some hamburgers.  We’re still eating very well on the provisions brought from home.  My plan of using the Engel refrigerator as a freezer has worked out very well.  After dinner I make one more run out to the crab trap, again with disappointing results.  I relocate it to a place closer to the boat, and it’s time to settle in for the night  We get a light rain shower, but right now the sky is clearing off.  In the morning we’ll make our way over to Alert Bay, where we’ll take a slip in the marina.  We plan on visiting the wonderful First Nations museum while there. 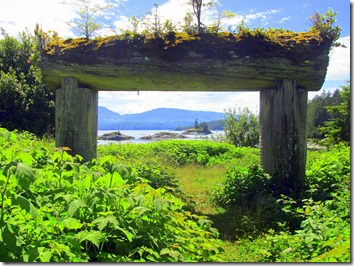 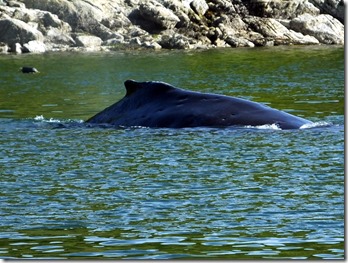