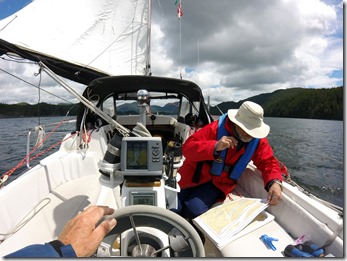 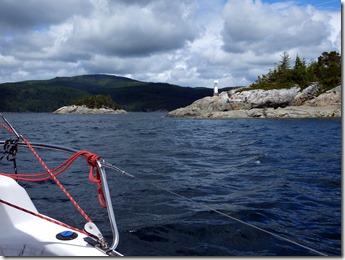 We untie and get underway at 7:15am, not completely certain where we’ll end up when we drop anchor.  We hope to get all the way to Bond Sound, however standing in the way is Johnstone Strait, with its nasty reputation for dashing hopes.  The forecast for Johnstone is marginal, with wind strong in the early morning, dropping a bit by midday, and then increasing in the afternoon.  Wind of any appreciable strength on Johnstone Strait interacts in very bad ways with waves.  We encounter brisk winds in Chancellor Channel, after passing through Greene Point Rapids, where we  buck the last hour of ebb.  We get a welcome break from the wind and chop when we turn into Wellbore Channel.  Our final tidal rapid, Whirlpool Rapids, awaits us at the northwest end of Wellbore.  By the time we near Whirlpool, the tide has turned and we’re riding the current, which boosts our speed by 3 knots or more.  Whirlpool is running strong, but without the deep eddies which can set up on an extreme ebb tide.  As we near the end of Wellbore Channel, we also near a decision point.  Should we stop at Forward Harbour and anchor for the night there, going with the sure thing of forecasted gentle conditions tomorrow on Johnstone?  If we do that, we’ll still be a day behind our scheduled pace.  Should we push on, down Sunderland Channel and out onto Johnstone Strait, shooting to go all the way to Bond Sound, but risking a thrashing if Johnstone is kicking up his heels?  I see a trawler about a mile ahead of us, halfway up Wellbore.  I radio him, and ask him if he’s going out onto Johnstone.  He’s on the “Anna B”, and he says he is.  I tell him I’d like to call him back when we get to the entrance to Forward Harbour, for a report on sea conditions out on the big water.  He says that would be fine, so when we reach the decision point, I radio him back.  He says Sunderland has 1 foot chop, but that Johnstone will likely be rougher.  Greg and I talk it over and decide to keep on going.

We cross over to the north side of Sunderland in a moderate chop.  We start taking spray over the bow, so we lower the dodger windshield, and I don my foul weather gear.   We stay close to the northern shore, and find the water less rough there. While about 75 yards from shore, Greg spots a black bear, shuffling along on the exposed low tide rocks.  Our first bear sighting of the trip.  We’re past him before we can grab cameras for a photo, but it’s still a fun sighting.

We get a radio call from “Anna B”, who reports that Johnstone Strait is really settling down.  That’s great news.  Shortly after lunch, I spot something dark ahead, in the periphery of my vision.  I look more closely and call out “Whale!”  Greg looks in time to see the great whale arch its back above the water surface and then dive, fully exposing its tail flukes before disappearing from view.  It most likely is a humpback whale.  From past experience I figure that this whale has sounded, deep, and we’ll not see it again. 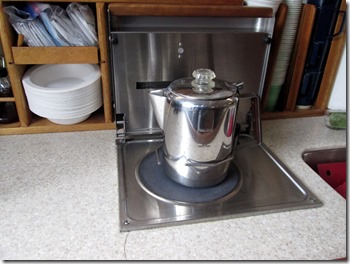 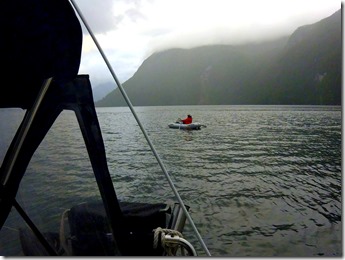 After many hours of cruising we finally reach our turning point, into Havannah Channel, which marks the entrance to the Broughton Islands.  We cruise on, up Havannah and into Chatham Channel, past the Blow Hole, across Knight Inlet and finally, into Tribune Channel.  Our final turn is into Bond Sound.  About halfway up Bond, I turn on the stove and get things out for dinner.  We’ll begin our dinner preparations while underway, to save a bit of time.  It’s been a long day, and we’re both very hungry.  We fix a garlic pasta shell dish, and fry up a ham steak.  A fresh green salad and pineapple cups finish off the fixings.  After dinner I drag the crab pot out from the kingberth dungeon, and row out in the dinghy to drop the pot.  When I was here with Sandy in 2014 I had good luck crabbing here.  Hope to repeat that act.  As evening settles in, the air outside gets very still, providing perfect conditions for a mosquito invasion.  We take defensive actions, but still find ourselves swatting at those which penertrate our defenses.  Greg asks me what time to set the alarm for.  I tell him no alarm tonight.  Tomorrow will be our first leisurely paced day of the trip.