What we heard in last evening’s forecast suggested that crossing the Strait of Georgia would be possible today.  What we experienced was something totally different.  Alarm sounds at 3:45am, and before 4am the anchor is up and we are underway.  It’s clear out, still quite dark with just a hint of light low on the eastern horizon.  A breeze, disturbingly fresh, ruffles the waters of Departure Bay as we head for the entrance.  I glance back to see that the dinghy is closer 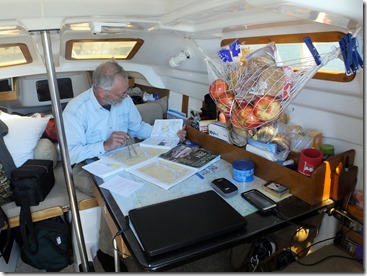 to the boat than usual.  A glance down over the stern reveals the problem.  Tow rope has wrapped around the engine’s lower unit.  Greg passes the boat hook to me and I raise the engine out of the water, still running.  I figure I can quickly loop the line back into place, failing, however, to take her out of gear.  Just as Greg is reaching for the shift handle, a prop blade snags the tow rope, wrapping line around prop, and the engine abruptly dies.  Grrrr.  It’s fairly easy to unwrap the line, no harm-no foul, and before long we’re underway once again.  As we near the entrance to Nanaimo Harbour, however, we encountere increasingly rough seas.  Out here the wind is quite stiff, and ahead we find whitecaps everywhere.  We push on, confident in the forecast of settling conditions as the morning wears on.  However, we haven’t gone more than a mile and a half and we’re seriously pounding.  Heavy spray regularly breaks over the bow.  Greg closes the dodger windshield so we don’t get soaked.  We nervously discuss the situation and decide that, with 5 to 6 feet seas already punishing us,  retreat is the only sane option.  I swing the wheel around after passing a particularly high sea surges past us, we reverse course and head back for the shelter of the now inappropriately named Departure Bay.  Running with the wind and swell immediately eases our ride, and we return to last night’s anchoring spot without difficulty.

Today’s intended run would have kept us on our itinerary, so carefully calculated in the past several months.  I used to use a driving map program which featured a helpful woman’s voice.  She would guide me to my every next turn, and when I missed a turn, she would speak to me in an almost scolding monotone:  “Recalculating”.  Well, we spent the next hour or so recalculating, since it was obvious we wouldn’t be getting across the Strait of Georgia today.  This would put us at least a full day behind our planned pace, and would negate my calculations for passing the tidal rapids we will encounter in the next several days.  This is not a serious problem this early in the trip, since we have ample cushions built into the plans, however, it is frustrating.  Also, we’re both very eager to reach new destinations.

After lunch I take my customary snooze, and when I wake up, I grab the binoculars to scan the horizon.  Before noon, you could clearly see the humped silhouettes and spitting spray of high swells and whitecaps on the horizon. 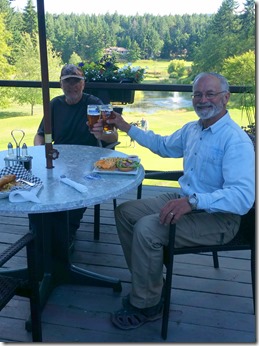 They’re called “elephants”, and we could clearly see very large elephants.  However, around 2pm the horizon looked much friendlier.  A phone call to Schooner Cove, a marina about 11 miles up the coast of Vancouver Island, confirmed what we were seeing.  We decided to head out again and move up to Schooner Cove.  This would give us a nice jump on a crossing tomorrow, plus the chance for showers and a restaurant dinner.  We head out and, this time, the seas are half or less than what we hit in the morning.  The ride is still bouncy, with some spray over the bow, but nothing like our earlier pounding.  Also, we’re able to maintain a decent speed of 5.5 knots.  We reach Schooner Cove just before 5pm, tie up on “F” dock, get registered, and call for a shuttle ride over to the Fairwinds Bar and Grill.  The restaurant is on a golf course, beautiful grounds, excellent food and good beer.  After our shuttle back to the boat, we shower and now feel great.

Earlier today I’d figured out how to access internet with the cell phone, enabling me to publish my earlier written blog posts.  We also were able to view several weather sites.  Tomorrow indeed looks like an excellent travel day, and several more appear to follow.  We hope to make it all the way to Refuge Cove tomorrow.