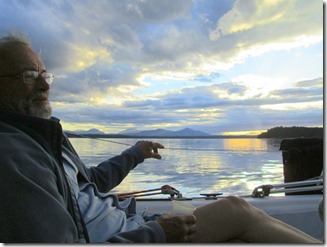 We spent the final hour before last evening’s sunset sitting in the cockpit, sipping sherry and snapping sunset photos.  We slipped into a totally relaxed state, which was, quite simply, the sea 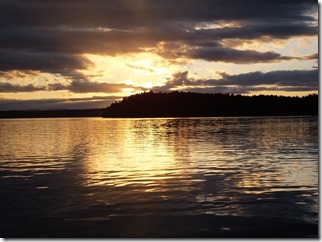 lulling us into ill founded complacency.  We didn’t get around to listening to the weather forecast on the VHF until it was quite dark outside.  The brief mention of wind beginning later that night, out of the northwest, and continuing on through the next morning, pretty well slid right by us.  After spending the afternoon in shorts, enjoying the warm sunshine and still air, with the boat comfortably anchored in a nice, sheltered bay, we went to bed feeling all was well, but utterly failing to take into account that our little bay was open to the north.  About an hour and a half after retiring, and shortly after we had both dropped off to sleep, the wind hit.  Beginning abruptly, and right out of the northwest, it quickly sent uncomfortable swell and chop into our anchorage.  I dressed and stepped outside, to confirm that the anchor was holding, but we both knew that sleep would be nigh unto impossible under these conditions.  I briefly considered raising the anchor and motoring across Ruxton Channel to a small bay at the south end of De Courcy Island, which was sheltered from wind and swell.  After considering the risks associated with such a maneuver, in the dark, we opted stay put and take our lumps.  I grabbed a pillow and lap blanket and reclined in the cockpit, on anchor watch, just to make sure we didn’t drag.  After a couple hours of that I was stiff and chilled, and went below to my sleeping bag for the last hour and a half before our alarm would go off.

We’re up at 3:30am, with the wind still blowing, but not quite as hard as earlier last night.  We want to be off the anchor by 4am, so we can time the slack for passage through Dodd Narrows, 5 miles to our north.   We are alone in making this passage, apparently the only boaters crazy enough to be going through Dodd Narrows at 5am in high winds.  On the north side of the Narrows, the wind is strongly funneling southward, raising a rough chop which periodically breaks over the bow, sending spray back into our faces.  We’ve already concluded that the chances of our being able stick to the original plan of cruising halfway across the Strait of Georgia, to Jedediah Island, are virtually nil.  I’ve also concluded that I need to visit a fuel dock earlier than planned.  Adverse currents and rough seas have resulted in uncomfortably low gas levels in the tanks.  We head for the Nanaimo Port Authority fuel dock, tying up there at 6:35am.  Surprisingly, the manager is already there, preparing for his scheduled 7am opening.  We straighten things out while he completes his tasks, and he then turns the pumps on and fills us with gas.  We also buy a block of ice, and are under way shortly after 7am. 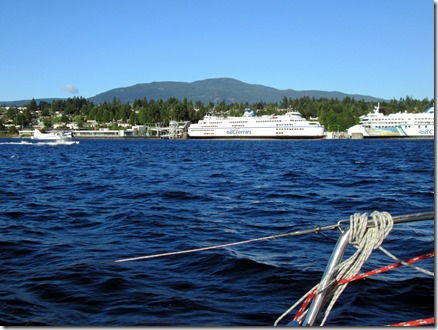 Under normal conditions, we’d be in great shape to make big miles, however, today’s blustery winds have other ideas in mind.  We prudently decide it would be a bad idea to try 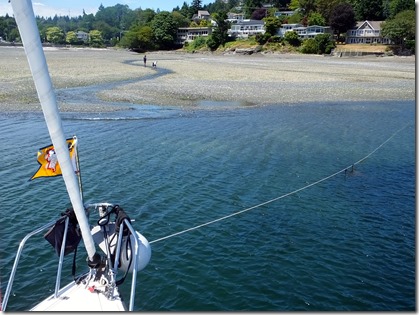 getingt outside Nanaimo Harbour and heading up the coast to the next available shelter, at Schooner Cove, which is about 12 miles away.  Instead, we select a spot in Departure Bay, near the shore, and drop anchor in about 10 feet of water.  The tide is going out, but I figure we have plenty of water beneath us.  Well, with today’s falling tide, we end up having enough water under us, but just barely.  At dead low tide, our anchor ends up in water less than a foot deep.  I have about 100 feet of rode out, and this keeps the boat floating in about 6 feet of water.  No worries, all that water will come back in a few hours.

We still have hopes that the wind will moderate by noon, enabling us to go at least as far as Schooner Cove.  However, after a phone call to Schooner Cove Fairwinds Marina, those hopes are dashed.  The well informed fellow at the marina opens his computer to detailed weather information, and informs us that all this wind is due to air being generated by a low off the Queen Charolotte’s, and it’s not expected to moderate until this evening.  This picture is reinforced by the VHF weather information we tune in to.

With time to spare, I decide to remove the pedestal cover and try to figure out why our auto pilot isn’t working.  Greg and I had installed a new drive motor about a month prior to the trip, and it worked fine in the driveway, but on our first day out, the motor refused to run.  To my surprise and joy, I see the trouble right away.  The power cable to the drive motor has slipped off.  When I reinstall the cable the auto pilot works fine once again.

We settle into an unplanned layover day, catching up on journals, naps, and minor repairs.  We plan to get another 4am start tomorrow, in hopes of making up for some of our lost time.  More favorable conditions are in the forecast, for a crossing of Georgia Strait.