The idea for this cruise first grabbed me in the summer of 2011.  Sandy and I were taking our (then) 11 year old grandson on a 3 week cruise through the Canadian Gulf Islands.  We’d taken a slip in Wharf Street Marina, in Victoria’s Inner Harbour.  While there I noticed a rather tired looking MacGregor 26X slowly maneuvering into a nearby slip.  I never can pass up a chance to chat with a fellow Mac owner, so I wandered over to say hello.  I learned that this couple had just completed a circumnavigation of Vancouver Island in their boat.  I was duly impressed, and began right then to dream of cruising our boat along the same route. 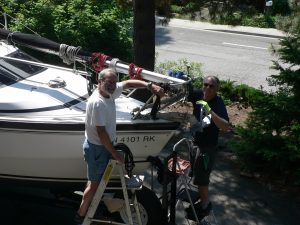 Sandy, my wife and long time cruising partner, didn’t share my level of interest, and so decided to pass this trip up.  I asked my close friend Greg if he’d be interested in going along.  We’ve been hiking, hunting, canoeing and camping buddies for more than 40 years.  He was newly retired, and he jumped at the chance.  We tried to schedule the trip for last year, however that didn’t work out and so we rescheduled for this summer.  Last winter we poured over charts and cruising guides, gradually working up an itinerary.  We circled June 15 as our departure date, and spent the past several months planning and preparing. 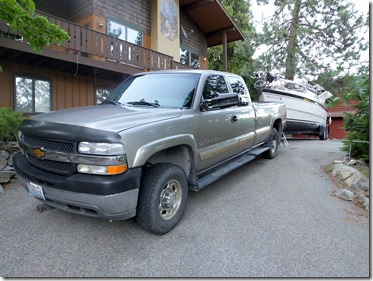 Now, at long last, we’re on the eve of departure.  At 7am tomorrow morning we’ll pull out and tow the boat to Oak Harbor.  We’ll attend my grandson’s high school graduation on Saturday, then put the boat into the water on Sunday, spend one night in the marina, and early on Monday morning, we’ll shove off.  Our timing is keyed to reaching Deception Pass in time for the morning slack.  We’re more than eager to finally get underway.

The boat is heavily loaded with provisions and gear, and the truck bed is likewise filled with gear and accessories.  I’m pretty worn out right now.  It’s amazing how, despite the best efforts at preparing well in advance, those inevitable last minute tasks and chores seem to pile on.  It will feel great to start the truck tomorrow morning and head for the water.