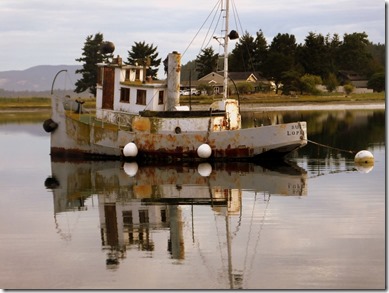 Our final day is all about timing the current.  We depart Fisherman Bay at 6:30am, and are aiming to arrive at Deception Pass in time for the 9:37am slack, with turn to flood.  Arriving early is not to our advantage; being a little late will be ok, and give us a good shove to inside waters.  Unlike our low tide arrival in Fisherman Bay, we’re at mid-tide on our way out, with plenty of water to work with.  It doesn’t even look like the same place.  Our route takes us right past Duane and Lorrie’s home, perched atop the cliff at Upright Head.  As we draw near I give them a cell call.  As they did 7 weeks ago at the start of the cruise, they step out to the railing, wave to us, and then ring their bell.  It’s the sound of friendship and goodwill.  I reply 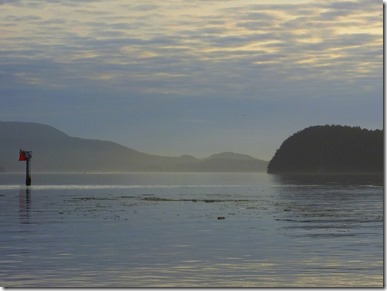 with two quick blasts on the air horn, and then we motor on, toward Thatcher Pass, which will be our exit from the San Juans.  The current is running strong on the ebb, giving us a solid 3 knot push on the way out.  Once out in Rosario Strait, the strong ebb continues to affect our progress, albeit in a most favorable way.  The current is setting strongly to the south.  Our course toward Deception Pass is southeast, so our speed benefits significantly from the current.  However, I regularly must adjust course to counter the effect of the southerly current, which seems determined to set us onto Belle Rock.  This nasty rock pokes most inconveniently out, square in the way of boats traveling between Deception Pass and the San Juans.  We’re averaging more than 3 knots faster than our throttle setting would justify, and when we pass by Belle Rock, our speed accelerates sharply, up to a brief top speed of 11 knots.  All this extra speed is tending to bring us to Deception quite early, however, in the last 2 miles we enter a counter current which slows us to 4 knots.  We end up passing beneath the Deception Pass bridge one minute past the published slack time.  Boat traffic is quite heavy, in both directions.  Once inside, I empty the ballast tank and give her full throttle for the first time on the trip.  Our speed picks up, although not as much as the reputation of the planing MacGregor might lead people to expect.  Our heavily laden boat, still burdened with cruising gear and supplies, peaks out at 10 knots.  While not fast enough to water ski behind, it still nearly doubles our speed from the rate at which we cruised for most of the trip.  Both noise and rate of fuel consumption are dramatically higher than we’re accustomed to, but today, it’s an acceptable trade-off, because we’re headed home.

In quick succession we pass Hope Island, Strawberry Point, Polnell Point, and the red buoy which marks the turning point for entering Oak Harbor.  We’re coming in at dead low tide, and the tide today is a minus 2 foot tide.  Great amounts of Oak Harbor are exposed as mud flats, however, the waters immediately next to the Oak Harbor Marina are sufficiently dredged to permit our entry.  At 11:50 am we ease into slip number 36 on F dock, bow in starboard tie, and we’re home.  We’ve been out 45 days, have cruised a total of 1,082 nautical miles, ranging from 48 degrees north almost to 51 degrees north, and extending 6 degrees of longitude out, and back again.  Weather impeded our progress only once, when high winds delayed our crossing of the Strait of Georgia for a day and a half.  The occasional cold fronts, with associated rain and wind, hit us at convenient times when we were either on a dock or in sheltered waters.  We were blessed with settled weather and favorable conditions as we approached each of the challenging places in the circumnavigation:  Johnstone Strait, Cape Scott, Brooks Penninsula, Estevan Point, and the Strait of Juan de Fuca.  We had but one serious day of fog, on our run into Victoria.  The fishing was good, wildlife viewing was wonderful, the scenery was spectacular, and the people we met along the way were fascinating and memorable.  We consider ourselves fortunate to have been able to experience this great cruising area, and to have had such a successful trip. 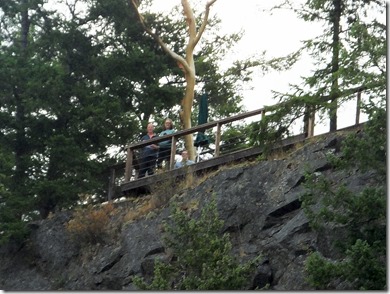 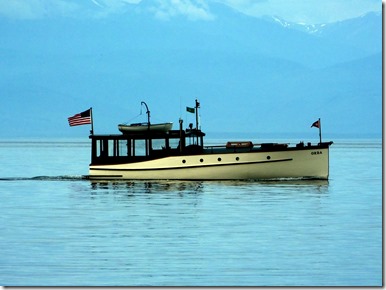 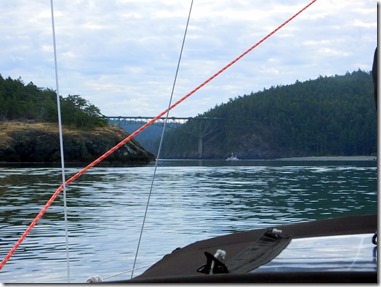 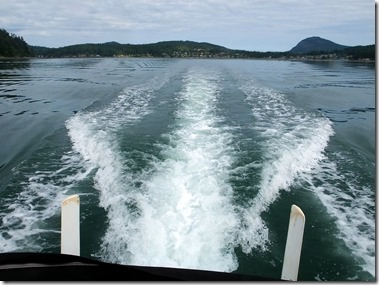 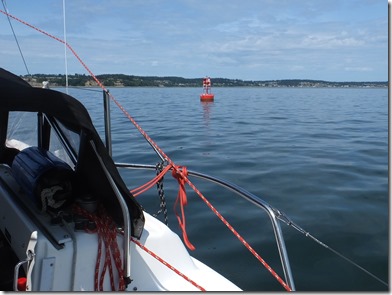 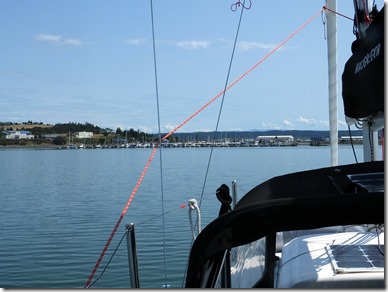 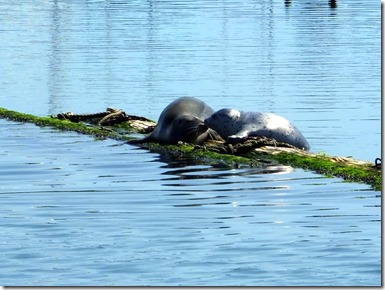